We had a great time last weekend at the Chesterfield Berry Farm where we performed puppet shows and ran a craft table. For the craft table, we had the children making their own unique chicken rod puppets. My youngest daughter was out (she is three), and even she made one of her very own chickens. She picked out the colors and, of course, the number of eyes! 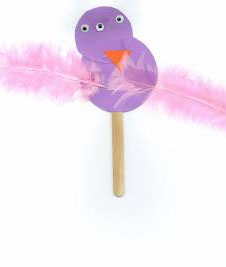 The festival was a lot of fun with a hayride, tractors, a pig race, pony rides, face painting, craft table, and (yes!) puppet shows. Plus you could pick a pumpkin or two (or three or four!) to take home. ‘Tis the season, right?

There was also a wasp.

A wasp that was hiding on our stage.

A wasp that I sat on during the performance.

Yes, it totally hurt. A lot. But I kept smiling and going. My partner in the show (Sam, my husband) did not even know it had happened. So I am here to brag about keeping my composure, because I still (five days later) have a lovely, bright red welt on the back of my left leg. (I wear a skirt as attire in this particular show.)

We will be doing shows at the Chesterfield Berry Farm at the end of the month. I am going to look very carefully at the stage riser before I sit down…

Puppets?
About Our Staff