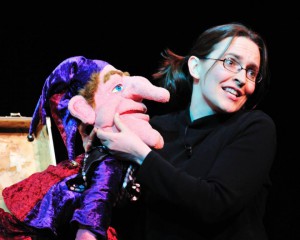 Barefoot Puppet Theatre has been building and performing original works since 1997 when founder and director, Heidi Rugg, began building puppet shows from the basement of her home in Richmond, Virginia. The first show she originally designed to fit in the back of a Volkswagon Golf! From these humble beginnings, the company (and the the touring vehicle) has grown significantly and now tours nationally while continuing to create new works for young audiences and their families.

We are open to touring almost everywhere — and have been out of the country! For those of you who have nothing to do or wish to study for the “Barefoot Puppets Trivial Pursuit Game,” we have a timeline below with everything you ever wanted to know about Barefoot Puppets…and then some!

Our first official year! Heidi founds the company, marries Sam Rugg, and builds the first show in their basement (whew!). In building this first show, she uses no power tools…everything is cut by hand with a mitre block, a hand saw, and lots of blisters. Little Red & the Gingerbread Man is a big hit! For Christmas, Sam gives Heidi some power tools! You can still see the show today, albeit on a bigger, newer stage that was built with many power tools. Touring Vehicle: VW Golf

With warmer months approaching, it quickly becomes apparent that Barefoot Puppets will need more than just a winter-themed show! Heidi builds African Trickster Tales and enjoys creating new designs for rod-puppets in the process. Trickster tours to many libraries for the Summer Reading Program. At the end of the summer, Heidi begins to research and build her next show, Dreamtime: Tales from Down Under. Touring Vehicle: Peugeot Station Wagon

Dreamtime premiers — the company’s first tabletop rod-puppet show. This style of puppetry is a distant cousin to Japanese Bunraku and pairs perfectly with narration. The baby platypus is too cute. Heidi begins to study language dialects and accents for vocal work. The studio space begins to take over more and more of the Rugg home. Touring Vehicle: Dodge Van

Eureka! Heidi wakes up in the middle of the night with the design for a new moving mouth mechanism for Galapagos George. Sam joins the company full-time in April. Sam builds the set for Galapagos George and completely redesigns the sound system and invents an amazing cuing system involving foot pedals that can be operated from multiple points around a stage (yeah, Sam!). We tour with a child in tow for the first time. Touring Vehicle: Dodge Van

Busy year! We finally move our studio out of the house and into The Shockoe Bottom Arts Center. Unfortunately, this is a short-lived arrangment as Shockoe Bottom was doomed to become condominium central. Heidi begins writing The Little “Bread” Hen. Touring Vehicle: Dodge Van

We have our Smithsonian debut! We finish building The Little “Bread” Hen, our first two-person show. It was a hectic build as two puppets were stolen from our studio and had to be rebuilt in the thirteenth hour. Matt Newman comes on board for the summer touring season and does an excellent job! In the fall, Matt leaves for William and Mary. Michael Bruckmueller steps in and lends his considerable talents to the company, bringing a new dimension to the show with his impressive improvisational abilities. Touring Vehicle: Dodge Van was replaced by 15-passenger van, which was smashed by a falling tree during Hurricane Isabel. This was replaced by “The Mystery Machine,” a teal Chevy Astro Van that pulled a cargo trailer full of puppets.

African Trickster Tales becomes a two-person show. Sam designs amazing mechanism for fabulous scene changes; Melanie Johnson and Rey Mehlhorn help with papier-mache scenery and props. Galapagos George is performed at the National Puppetry Festival for Puppeteers of America in Minneapolis; George recieves an UNIMA Citation of Excellence, the highest distinction in North American puppetry. Heidi and Sam both present workshops at the puppet festival. We tour through the mid-West in a bus! In September, The Wolf Trap Foundation for the Performing Arts awards us with a commission for a new show, Beneath the Baobab Tree. Touring Vehicles: “Mystery Machine” Astro Van with Trailer and MCI Bus (Ginny) 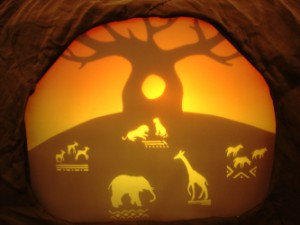 We build and premier Beneath the Baobab Tree at Wolf Trap as part of an early childhood program for the arts. This brings on board several new performers (Shannon Stott and Olumide) and studio help. Rey Mehlhorn, Melanie Johnson, Anne Sisk, Ginny and countless other people venture into the studio to get their hands, literally, into the show. Melanie stunt doubles as a shadow puppeteer with great results. We experiment with shadow puppetry on an overhead projector and create some amazing full-color shadow puppets. Lily Lamberta (formerly with Bread & Puppet and founder of All the Saints Theater Company) comes on board to lend her experience to the team. In December, Heidi and Sam welcome their second daughter into the world. Touring Vehicles: “Mystery Machine” Astro Van with Trailer and MCI Bus (aka Ginny)

We celebrate ten years of performing! We are invited back to Wolf Trap with Beneath the Baobab Tree for a second season. We perform Galapagos George at The Center for Puppetry Arts in Atlanta for three weeks with mostly sold-out shows. Little Red & the Gingerbread Man receives a makeover in honor of our tenth anniversary. We premier the new version at The Smithsonian Discovery Theater the day after Thanksgiving. We are thankful the show is so well received. Touring Vehicles: Astro Van with Trailer and MCI Bus (aka Ginny)

We have had a great time touring this year and enjoyed all the Summer Reading Program shows we did for Virginia libraries. We made our international debut at Puppets Up! in Almonte, Ontario! (It’s amazing and beautiful there — go and see!) We finally finish our new website. Hope you like it! We are working on a new show…and a book for Galapagos George! More details on all that later… Touring vehicle: “Bruce,” a 2006 Dodge Truck with Cargo Trailer with ramp…know anyone looking for a bus?

We had a great time touring this year and were deilighted to spend time with puppet friends in many states. Our biggest excitement was the news that we were to receive TWO grants in support of our newest show (“Little by Little,” to be developed in 2010). We received a grant from Puppeteers of America and from The Jim Henson Foundation. The grants will be used to fund, in part, the new show’s materials, music, and creative time. Time…what a concept! Touring vehicle: “Bruce,” a 2006 Dodge Truck with Cargo Trailer with ramp…know anyone looking for a bus? 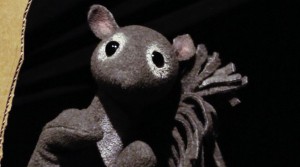 We spent the greater part of this year working on our new show, Little by Little. We planned to debut this in 2011, but the economy has not cooperated. This past year was very challenging for us. The economic crisis finally filtered down to us smaller companies as libraries, theatres, and schools saw their budgets ravaged by cutbacks. We knew it was coming — but we didn’t expect it to be as bad as it really was. We are happy to report that 2011 is looking better already and are hopeful for the future — what else can we be? Touring vehicle: “Bruce,” a 2006 Dodge Truck with Cargo Trailer with ramp…know anyone looking for a bus?

We take a deep breath and keep moving along!

The most amazing thing happened in 2012: Heidi Rugg went to the National Puppetry Conference at the Eugene O’Neill Center for Theatre in Waterford, Connecticut. Overwhelmed by technical difficulties, she takes her work-in-progress to the O’Neill to troubleshoot some of the issues she is having with certain sequences in the show. It’s a life-changing experience to be around so many amazing and talented puppet artists from all over the country. She works with a great team of people to solve all her problems with a 20-ounce bottle of Deer Park Water and Sharpies. (You’ll see the amazing results when the show opens!) Touring Vehicle: “Joey” the Suburban with Travel Trailer.

Well, we took a break from building “Little by Little” to build a new show, “Ooey Gooey Poetry.” It’s a fun piece that is also a bit silly. Heidi returned to the O’Neill Conference again, but this time as a member of “Resident Company,” so she could help another artist create a new work. She works with Amy Rush and a team of other talented performers to put together a large-scale puppet saga and battle on the beautiful grounds of the O’Neill in Waterford, Connecticut. Touring Vehicle: “Joey” the Suburban with Travel Trailer.

Our big project this year was filming all of our shows! We look forward to having the edited clips available on our website soon! So excited to be part of Puppets Off Broad Street in Richmond as a Resident Company Artist. Touring Vehicle: “Joey” the Suburban with Travel Trailer.

Well, Heidi is learning all about wet-felting. Out of a concern for the toxic nature of so many materials used in puppet building, Heidi is re-thinking how she makes all of her puppets. It’s kind of like reinventing the wheel, but in a good way. Heidi also launched “The Naked Puppet Exhibit” at the National Puppetry Festival. Touring Vehicle: “Joey” the Suburban with Travel Trailer.

We create a new show for very young children called “Run, Run As Fast As You Can!” This show features rod puppets and object puppets. It’s VERY lively and VERY interactive with lots of opportunities to baaa, cluck, and moo! We are still working on finishing up “Little by Little.” (And, little by little, it will someday be finished! Touring Vehicle: “Joey” the Suburban with Travel Trailer.

Time flies! This year we celebrate 20 years of touring our shows and sharing workshops. We are incredibly grateful to do what we LOVE. We are excited about upcoming adventures in the next twenty years — starting with a collaboration with 5th Wall Theatre and TheatreLab’s production of “Hand to God” next summer. We also worked to co-found RVA Circus Arts Camp!  Touring Vehicle: “Joey” the Suburban with Travel Trailer.

We moved. This was such a huge undertaking! We had been in the same house for over 20 years. We moved our home AND our studio. Our new studio is AMAZING, and we are so thankful to have the space to create that we have always needed to do our best work. Want to come visit? Please do! Touring Vehicle: “Joey” the Suburban with Travel Trailer.

A big part of this year was working on a project for the Highlands Festival in Abingdon, Virginia. We collaborated with a team of highly talented individuals to create an interactive performance piece that combined puppetry, dance, drones, LED technology, and more! It was a huge undertaking, and we learned so much from working on this project. We even “invented” a new type of puppet using light within a silhouette to create shadow puppets that were made up of light! We toured extensively this summer and also worked on Professional Development with Partners in the Arts. Touring Vehicle: “Joey” the Suburban retired this year to be replaced by our new van. Still working on a name!