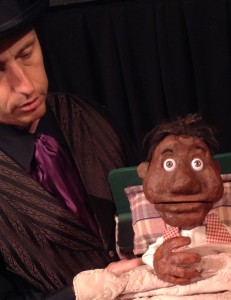 Sam has been full-time with the company since 2001. He describes his job as, “I drive the truck and carry things,” but his role is so much bigger than that. In addition to his masterful driving and carrying skills, Sam keeps the books, maintains and improves the technical equipment, and designs cool scene changes. He developed a push button cuing system for the sound system, allowing performers to seamlessly cue their own music during a show. As if that weren’t enough, Sam began to take on performing roles in 2005. He now performs in both African Trickster Tale and The Little “Bread” Hen, and Ooey Gooey Poetry. A professional auto mechanic of 18 years, Sam maintains the vehicles and brings a knowledge and love of power toys, er, tools, to the company.